So Jim & I decided to take a boat to Crossover today instead of a car.  We left from Akosombo where we are staying and it took about an hour by boat...click on this video to see our welcome party, another unbelievable welcome!


After arriving, we went back to the "classroom" because I had a few more things to give out:  the rest of the tshirts that Eddy & EI-LO donated, 2 lacrosse sticks, and a suitcase full of food I brought from Costco: Cheez-its, Famous Amos cookies, Nutella, Boysenberry Jam and a few other treats.  When we got there, Jim & I bought 50 loaves of fresh bread from the adjacent town (called Djemini).  Each kid got a cookie and a slice of bread with either jam or nutella on it.  WOW.  most of the kids had never had a cookie and the look on their faces when they took that first bite was priceless!

After the kids ate, Jim & I took individual pictures of each kid...when we create our 501c charitable organization we will create a website and post each picture along with their names and a little blurb that they will write about themselves.  Should be pretty neat.  Here is a pic of lacrosse making it to Africa

Jim & I also met with a contractor/builder today, which was interesting.  Just doing some diligence on costs involved in building a structure for the kids to sleep in as well as a classroom(s).

The rest of the day was spent just hanging out, which was really nice.  We played basketball, lacrosse, etc.  It's funny, the little ones just followed us around, we would walk to grab a water, about 15 little ones are in tow, just wanting to be with you.  They thrive on human contact, just touching a shoulder or holding a hand, they look up at you w those eyes that just kills you!  I don't think they get much nuturing or human contact.
The last thing we did before returning ot the hotel was watch a soccer match.  The kids were all in their new jerseys.  Notice the dirt/rocky field and note that about half of the kids played barefoot.  Perspective 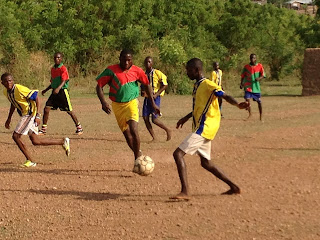 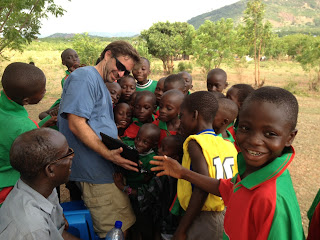 This last pic is the kids watching a video of themselves on Jim's iPad.  They thought it was HILARIOUS!!
Posted by Unknown at 12:00 PM No comments: